Alicante has always been a city with a lot of charm for its inhabitants and those that have been seduced for its strong points, such as the Mediterranean or its cultural offer. Maybe the size of the city or the location have helped Alicante to win positions in the ranking of cities to live where you don’t have to pay excessively expensive prices. In addition, both the capital and the small towns have several constructions with new flats that can be adapted to the majority of pockets and investors.

A city, but not a big city. Having 330.000 inhabitants, Alicante has the perfect size to offer a range of innovative and quality services, and at the same time be able to access to them easily and fast. Simultaneously, in its neighbourhoods live people native of Alicante and new neighbours, young families and students. An increase of population has made possible a urban growth and nowadays, there are some available flats for those interested in buying them. The historical centre, Saint Joan (calm and close to the city centre), the expansion district and the Albufereta are some examples of the different environments, adapted to the visitors and to those willing to live in Alicante.

A sunny and accessible capital. In general, the flats and houses in Alicante have an affordable price, even more than other cities in the Valencian Community. And, instead, Alicante has one of Valencian attractions: the sun. Alicante can brag of having good weather during all year with an average temperature of 18º and with a winter less cold than in other regions of Spain.

A charming city. The beach is one of the main attractions for those that decide to buy a flat and live in Alicante. Farther than a nice bath and walk, the beach can be the perfect place to do some sport. In addition, the city has a harbour that promotes sailing as one of the sports – paired with golf – more associated to Alicante. A permanent and complete cultural offer with a great catalogue of activities waiting for those who want to live in Alicante, including gastronomy: fish, seafood and good products, everything combined in the same city. 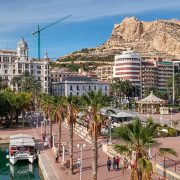 Get a mortgage for an apartment in Alicante
call us and find out: 93 846 40 03
Who is in charge of the maintenance of a house: the owner or the person who...

How to make your place a Smart house
We use cookies to ensure that we give you the best experience on our website. If you continue to use this site we will assume that you are happy with it.Ok
Scroll to top